No Result
View All Result

No Result
View All Result

PS4 vs PS5: Which One Should You Buy?

The PS5 launch is quickly nearing, and even though it might not be the quickest console in the world, it’s a notable upgrade compared to the PS4. Thanks to the new architecture, better resolution support, and storage because of the SSD, the new console is superior to the PS4 in virtually every way. During the recent PS5 reveal, the upcoming games were presented, and now we know what to expect. There’s a lot to discuss here, so let’s begin comparing PS4 vs. PS5.

Even a quick look at the specs of the PS5 tells us that it’s in another league compared to the PS4 (and the PS4 Pro, too). Sony has advanced the capabilities of the platform, giving the users more efficient storage, support for bigger capacity disks, faster compute parts, and support for higher resolutions.

8 Dating Apps that Are Bucking Against Tinder’s Model

5 Amazing Foreplay Apps to Spice Things Up in Your Bedroom 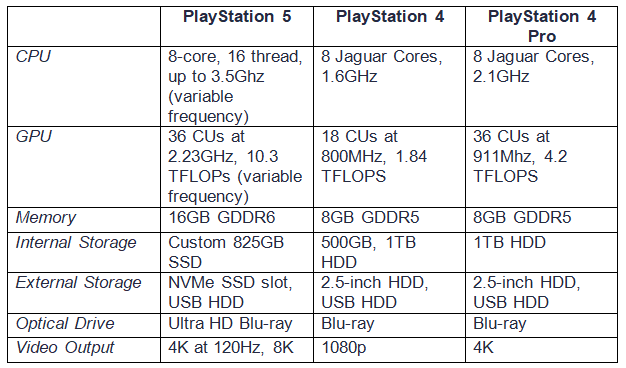 It’s crucial to acknowledge the context of these specifics. The PS5 is a new console built on a different architecture, and for this reason, some specs can’t be directly compared.

For example, the PS5 and PS4 Pro have an equal number of compute units (CU), although the PS5’s CUs have a higher transistor density, which makes them more powerful than that of the PS4’s.

Both consoles are based on custom AMD Radeon chips, although the PS5 has a significant advantage. Sony is giving twice the number of CUs to the PS5, and much higher clock speed. Still, the most prominent distinction between the two appears to be in the TFLOPs.

Despite TFLOPS not being solely indicative of performance, it’s a reliable number to mention when comparing. The PS4 clocks in at 1.84 TFLOPS, suggesting that it can manage 1.84 trillion floating-point operations per second while the PS5’s GPU is counted for 10.3 TFLOPs.

We’re more excited by variable frequency than the higher clock speed. Speed is up to 2.23GHz, however, it will decrease based on what’s needed of the GPU. Locked at 800MHz, the PS4 alters power depending on the workload to match the clock speed. More demanding games need more power, but the speed is constantly 800MHz.

For the new generation, power is constant, whereas clock speed changes. In the PS5 technical reveal, the architect of the system Mark Cerny demonstrated why. A graphics core with 36 CUs operating at 1GHz would allow for the same amount of TFLOPs as a 48 CU core operating at 750MHz — 4.6 TFLOPS — except the gaming performance would not be the same.

The overall idea is that higher clock speed is better, not more CUs, because the extra, slower units wouldn’t have sufficient computing performance to pull the weight. Through enabling variable frequency, the PS5’s GPU can deliver much higher clock speeds than expected.

We’ve analyzed the PS4 vs. the PS5 graphics using only numbers, but that’s not enough, because it doesn’t reflect the PS5’s more advanced architecture. Every PS5’s CU has approximately 60% more transistors than that of the PS4’s. Cerny highlighted in his presentation that it signifies the PS5’s 36 CUs are the same in terms of performance as 58 PlayStation 4 CUs.

Long story short, the graphics of the PS5 are much more impressive than the PS4. The GPU of PS5’s will have more cores, which will be faster and more capable.

The PS5’s improved graphical capabilities are there, presumably, to advance the resolution of the games as never before.

Sony with an HDMI 2.1 output is forward-thinking, despite the fact that most TVs don’t have an HDMI 2.1 port yet. This new standard of the PS5 supports higher resolutions and frame rates. More relevant to gaming, HDMI 2.1 supports variable refresh rate; it will stop screen tearing.

With the new console generation, we presume resolution will be an important marketing point because both Microsoft and Sony have already urged that their consoles support 8K resolutions.

8K displays will probably become more frequent by the end of the PS5’s life cycle. Right now, the focus is on 4K. Let’s assume that the GPU is powerful enough to push 60 frames per second or more, we are likely to be able to benefit from a high refresh rate TV with the new console.